Some people believe that wireless cannot go the distance for large commercial lighting applications. That is not true. Even with the widespread usage of wireless networks, it is still amazing that there are so many myths about them.  That is not a surprise since not everybody has strong IT knowledge. After all, IT can be quite complicated.

Wireless systems have successfully been deployed for large commercial smart lighting projects. They have proven to work just as well as hard-wired systems.

Myth #1: Wireless Networks Do Not Have Enough Bandwidth

Fine-tuning your commercial wireless lighting network will reduce any perceivable time delay, known as latency, in the network. Sensors on your lighting network are collecting data continuously, but that doesn’t mean that all the data is useful. With wireless being a shared medium, the key to good performance is not to clog the airwaves with unnecessary data. A technique called data filtering deployed in wireless networks filters out non-essential or useless data. This means the data sets are refined into simply what a user needs, without including other data that can be repetitive or irrelevant.

Myth #2: Wireless is Not Secure

As lighting systems become more interconnected and we extend the connectivity of these systems to the internet and cloud networks, security threats and the related risks will increase. If the system is implemented correctly, the risk is mitigated.

Authentication prevents unauthorized access to the lighting control infrastructure and it needs to be built into the system from the beginning to prevent unwanted intruders, viruses and Trojan horses (programs designed to breach the security of a system while seeming to perform some harmless function.)

In addition, a consistent end-to-end security strategy—from front end software over the control logic to the end nodes inside the fixture—strengthens protection against illicit access.  Lighting control system devices need to know that the commands they are receiving are from authorized devices and users.

Myth #3: Wireless is Not Reliable

In a wireless mesh topology, each network node (connection point on the network that can send, receive or store data) can communicate with every other device, and can relay messages for its neighbors. Mesh networks are self-healing, in that if any disruption occurs, data is automatically re-routed. The built-in redundancy of having multiple pathways available helps provide better coverage, particularly where there are line-of-sight obstacles, and makes the mesh network robust, reliable, and scalable.

Range is defined as the maximum transmission distance between transmitter and receiver in normal operation. The range of a wireless network is dependent on a number of factors including the wireless communications protocol used, building structure, and line-of-site obstructions. Additional access points or repeaters which amplify the signal will extend the range.

In a mesh topology, every node can forward a message to another node. This enables the lighting control system, typically dense with many controllable nodes, to naturally overcome any obstacle or obstruction by routing data.  To accomplish the same in a non-dense network, additional router nodes can be installed.

Some devices on a wireless lighting network require batteries, and both the lifespan and ability to know when a replacement is due is critical for facilities management as well as network performance. Typically, battery life is up to 10 years dependent on the frequency of transmission, power discharge rate, temperature, transmission power, and communication distances. Additionally, the ability to monitor the battery power status easily and avoid outages is critical.

Much of the uncertainty diminishes with an advanced lighting control system. Battery life is optimized with hardware and software specifications to reduce power consumption and meet lifespan estimates, and facility managers receive regular reports on battery condition and status so that replacement is predictable. 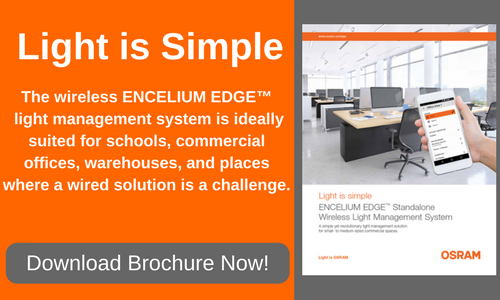