Extend the Life of LED Luminaires with Preventive Maintenance We’ve all heard about the key attributes of LED luminaires over traditional incandescent, fluorescent and halogen fixtures: greater energy efficiency, resistance to breakage, less heat emitted, and a longer lifespan. These benefits are easy to see or measure and are responsible for the widespread adoption of this technology across the commercial real estate industry. In addition, because SSL fixtures are digital in nature, important data about the location and health of a specific fixture or fixtures across a facility can be captured and leveraged by facilities teams.

Gone are the days of walking through a facility and checking each luminaire visually, or waiting for the service call ’my lights are out’. LEDs depreciate over time, but the signs that an LED luminaire or driver is not running optimally is often invisible to the eye. How do you make sure that your LED luminaires reach their published expected lifespan and also maintain acceptable lumen output (light level) across that lifespan? How do you make sure your LED luminaires meet the operating requirements spelled out in their warranty?

What are the key technologies that enable a preventive maintenance program?

Quality LED fixtures publish an expected lifespan of 30,000-50,000 hours or more, depending on the quality of the LED and the LED driver used. This is significantly more than a typical incandescent (1,000 hours) or a fluorescent (8,000-10,000 hours). However, the LED fixture will start to go through lumen depreciation over time affecting its performance and longevity. In addition, a luminaire may withstand a number of electrical transients or strikes that can affect performance and longevity.

LED driver data can tell you a lot the performance level of each luminaire as well as how much ‘life’ remains in the luminaire. Early detection can mean simpler and less costly repairs. For example, adjusting the current as the LED begins to fade effectively maintains 100% light output over life. In addition, a high temperature profile can indicate the fixture is being pushed beyond its thermal capabilities and this will affect the life expectancy of the electronics (the driver and/or the LED module).

Each luminaire can become a smart node on a lighting network, collecting data for the Light Management Systems (LMS) about the health of the luminaire including early failure detection and end-of-life indicators. This requires the controls and communications technologies to be integrated into the luminaire (in addition to a quality LED driver) during the design and manufacturing process.

Given the often invisible-to-the-eye signs that an LED luminaire is not running optimally and the investment required in an LED lighting system, preventive maintenance is essential. The technology needed for a preventive maintenance program requires that each luminaire become a smart node on the lighting network. Once this is done, the LMS can view and track the performance levels of the luminaire.

There are several integrated technologies that need to be specified as part of the luminaire design and manufacturing process. In addition to a quality LED driver, each luminaire requires an individually-addressable controls capability as well as the technology to communicate information between the driver and the LMS. The combination of these technologies will enable a predictive maintenance program that will keep your LED luminaires running at their optimum working condition and prevent unplanned maintenance including replacements. 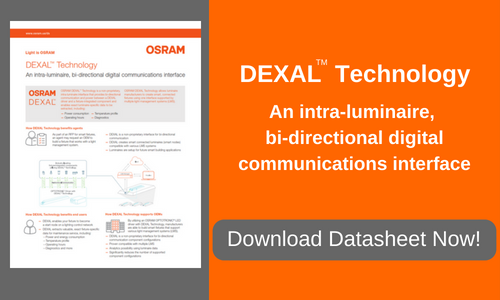