Building and fire codes including the National Fire Protection Agency, International Fire Code, National Electrical Fire Code, and OSHA require emergency lighting in every commercial building. Emergency lighting ensures that egress paths are lit when there is a power outage so that occupants can safely exit a building in the event of an emergency. The emergency lighting must go on automatically and immediately. In the U.S., it must remain on for 90 minutes after a power loss  and provide initial illumination that is no less than an average of 1 ft-candle and, at any point, not less than 0.1 ft-candle as measured at floor level along the exit path. Some U.S. states require lighting plans on file that highlight the fixture specifications and egress path.

Emergency lighting automatically switches on when there is a power outage.  It automatically illuminates exit corridors, aisles, corridors, stairs, ramps, escalators and passageways leading to an exit. Due to reliability requirements for life safety applications, most commercial building projects require the emergency lighting systems use artificial lighting and not natural daylight.

Distributed (decentralized) emergency lighting solutions are contained at the fixture level. The battery is integrated into the luminaire along with the emergency LED driver during manufacturing. It is connected to the LED driver which supplies it with a constant charge. One benefit as compared to a centralized solution is that each luminaire is independent of the next. If a battery fails in a luminaire on a distributed system, the failure is limited to that one luminaire and there is still a lit path for occupants to exit the building. The cost of ownership is less as compared to a centralized power supply option because emergency code requires you have a back-up power source for inverters and centralized generators in case they are compromised.

Luminaires with Both Normal and Emergency Mode Support

Today, a luminaire with an integrated dual-mode programmable LED driver can automatically switch the luminaire between normal and emergency mode at outputs that produce a consistent level of light along the egress path, even with different ceiling heights or obstructions. Back-up battery power is local within the fixture and is charged directly by the driver electronics. When AC power is ON, the Dual Mode LED driver is in Normal Operating Mode and it charges the battery pack. When AC power fails, the driver automatically switches to emergency mode and uses battery back-up power. When the AC power is restored, the emergency driver returns to the Normal Mode of Operation.

Often, egress paths include different types of luminaires. By integrating the same dual-mode programmable driver into all luminaires on the egress path, you can maintain a consistent light output as well as consistent up/down dimming performance. This creates an aesthetically pleasing, clean ceiling of light output.

Regardless of the size or type of commercial building, emergency lighting systems must be tested monthly for 30 seconds and annually for 90 minutes to ensure the system is working correctly. This is non-negotiable to meet code requirements. Depending on the system in place, traditional emergency lighting can be tested in several ways. You can literally walk the entire building and push every emergency fixture’s test button manually, and record the results. If you install self-diagnostic emergency fixtures, the fixtures can run through monthly test cycles and the annual 90 minute test.

Today’s self-testing LED emergency drivers make monthly and annual test compliance easy. They contain a control/monitor circuit that automatically performs a 30-second discharge test once a month and a full 90-minute discharge test once a year. The test switch can be seen during a quick walk-thru of the building. There is no need to climb a ladder to push a test button in order to determine the status of the emergency lighting fixture. This time-saving measure helps bring down maintenance costs.

Choosing the Right LED Driver for Your Emergency Lighting

A dual-mode programmable emergency LED driver offers the ability to program and customize light output of a luminaire in both normal and emergency modes. Emergency lighting no longer requires additional lighting fixtures or equipment along exit paths. During manufacturing, programmable LED drivers are designed into the luminaires and set to the current that the LED will operate under in standard mode and emergency mode.

The OPTOTRONIC® Programmable LED Emergency Driver is a single driver solution that offers the ability to program and customize the light output in both Emergency and Normal Operating Modes. Emergency power is delivered through an innovative battery pack, connected directly to AC mains power in the luminaire so that it is always fully charged. The battery pack leverages a uniquely designed harness that utilizes a single connector for easy installation and provides up to 18W in backup mode. Multiple battery pack options are available including slim, linear and compact.

The OPTOTRONIC Programmable LED Emergency Driver is self-testing. It contains a control/monitor circuit that automatically performs a 30-second discharge test once a month and a full 90-minute discharge test once a year. During automated routine testing, the self-testing emergency driver simulates an AC power failure causing the unit to automatically switch to emergency mode. The unit monitors the operation of the LED load, battery voltage and LED load connections.

A separate snap-on battery pack with harness, powers emergency lighting in the event of an outage and provides up to 18W in back-up mode.  Battery replacement, if required, is easy because there’s no rewiring involved. You simply snap-on a new battery. 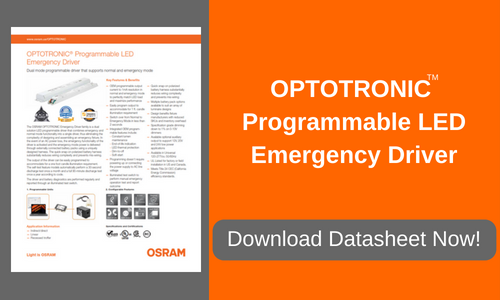