Smart Buildings are the Cornerstone of Smart Cities

Smart cities are projected to be the future of urban living and development. There is the anticipation that smart cities will improve the quality of life for citizens with a clean, secure, accessible, responsible, and sustainable environment.  It’s an ambitious aim and we are seeing the supporting infrastructure that will support these goals unfold.

The reason smart cities are so important is that cities are not only where most of the population lives but where the jobs are.  Data from the United Nations reveals that 68 percent of the world population is projected to live in urban areas by 2050, an increase from the current 55 percent. And according to a World Bank report, cities generate a disproportionate share of new private sector jobs. From 2006 to 2012, 750 of the world’s largest cities analyzed in the report created 87.7 million private sector jobs, accounting for 58 percent of all new private sector jobs in their 129 countries.

Cities drive the economy.  The same Word Bank research indicated that economic growth in 72 percent of cities outpaced their respective national economies. Likewise, McKinsey projects that 600 cities around the globe are expected to generate 60% of the world’s GDP by 2025.

To keep pace with urbanization, cities around the world are looking to leverage technology to transform their communities to smart cities where systems of interconnected sensors streamline a city’s operations and services as well as make the lives of its citizens more efficient.

Smart building and smart city infrastructures must serve similar needs—providing the technology framework for optimized operations and services such as lighting, water, ventilation, trash pick-up and security to stakeholders. Both infrastructures require connecting equipment and systems that are traditionally unconnected, and heavily rely on sensor data and wireless connectivity. Data aggregation and analysis is applied to systems and operations so that they can adapt and support the changing needs of the space (whether that be a building or roadway) and its stakeholders (in these cases, tenants or drivers).

Building and staff efficiencies are improving, plus new and innovative services for occupants are unfolding based on advanced technologies deployed. The latest Smart Building IoT applications are being piloted by different institutions as well. For example, Mt. Royal University recently piloted a space optimization solution to determine how space was actually used—what space was underutilized or congested, how occupants moved through the space, and whether the size and number of conference rooms matched the actual needs of students and staff.

Smart buildings and campuses can serve as prototypes for smart cities. They are less complex than cities and are able to implement new technology and infrastructures more quickly than cities. They are validating the savings, efficiencies and improvements realized with connectivity and data-driven automation, and can serve as part of the blueprint or model for smart cities. In addition, buildings are a fundamental part of a city, and could connect to the public infrastructure or integrate with a city-operated system to, for example, improve operational efficiencies, expand the services offered to occupants, or streamline energy savings initiatives linked to the power grid.

Smart lighting plays a central role in unlocking the power of a smart building. Because lighting is ubiquitous throughout all buildings and every luminaire is connected to a source of power, it is the perfect conduit for collecting data on what is happening across a space at any given time. Sensors embedded in luminaires make each light point a data node on the lighting system network and this data is the foundation of the analytics that power smart building solutions.

As you are in the process of planning your facility or community’s future and infrastructure requirements, consider lighting as a starting point. 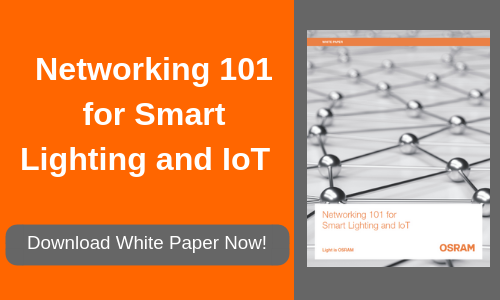